When Evangelii Gaudium (the Joy of the Gospel) was released on November 27 of this year, media focused on the dominant element in the Apostolic Exhortation, namely the Pontiff’s  challenge to the debilitating and growing divide between rich and poor.  His Holiness asked, “How can it be that it is not a news item when an elderly homeless person dies of exposure, but it is news when the stock market loses 2 points?” 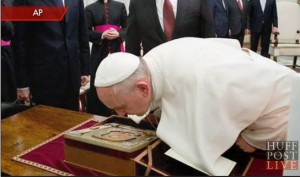 Huffpo helped readers grasp the genre of the document noting:

The 84-page document, known as an apostolic exhortation, amounted to an official platform for his papacy, building on views he has aired in sermons and remarks since he became the first non-European pontiff in 1,300 years in March.

What less captured the imagination of secular media was another very strong quality of this Pope, namely his deep passion for, and sound approach  to the importance of and improving interreligious relations. Huffpo’s coverage includes this observation in its reportage

Stressing cooperation among religions, Francis quoted the late Pope John Paul II’s idea that the papacy might be reshaped to promote closer ties with other Christian churches and noted lessons Rome could learn from the Orthodox such as “synodality” or decentralized leadership.

He praised cooperation with Jews and Muslims and urged Islamic countries to guarantee their Christian minorities the same religious freedom as Muslims enjoy in the West.

The short, well-written coverage of the news of the document’s appearance, on the Huffpo site is here