This is no time for obits or farewells, as we read below that Archbishop Tutu, despite his 79 years will continue to advise the “Elders,” and “will honor his existing appointments.”

We hope for the Archbishop’s positive influence in world affairs for many many years to come, and pray for joy in his increased time with family.

He played a prominent role in South Africa’s struggle against the whites-only apartheid system.

After his 79th birthday in October, he said he would reduce his workload to one day a week before retiring.

That work would be devoted to The Elders, a group appointed by former
President Nelson Mandela to tackle the world’s most pressing problems. 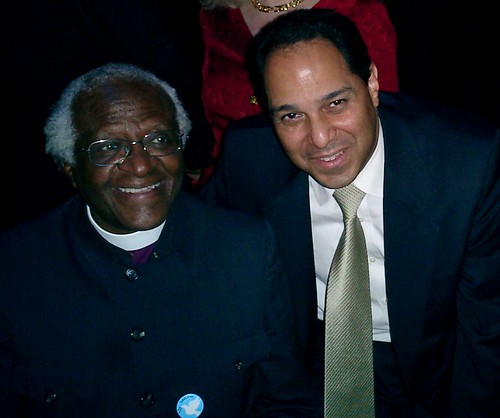 During the 27 years that Mr Mandela was in prison, Archbishop Tutu
spoke out against apartheid – and won the Nobel peace prize in 1984 for
his efforts.

He was chosen by Mr Mandela to chair South Africa’s Truth and
Reconciliation Commission and investigate the crimes committed by all
sides during the apartheid regime.

The former Archbishop of Cape Town, the first black cleric to hold
that position, said his career highlight was introducing Mr Mandela as
South African president in 1994.

In a nationally televised news conference from Cape Town, the
Anglican cleric described how his schedule had grown more punishing in
recent years.

“I have been very, very fortunate to have been given opportunities to
contribute in a small way to develop our new, democratic, exhilarating
and sometimes exasperating nation,” he said. “The time has come to slow
down.”

He said he wanted to spend more time sipping tea with his wife,
watching cricket, or visiting his grandchildren, although he added that
he would honour his existing appointments.

Since his retirement as archbishop of Cape Town in 1996, as well as
his work with the Elders, the cleric has launched his own peace
foundation, advised world leaders and played an active role as a public
speaker.

Archbishop Tutu spoke at several events during the recent football
World Cup in South Africa, which he described as one of the most
important events locally since the end of apartheid.