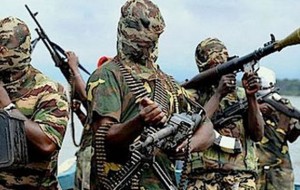 New, more gory details have emerged in what was reported first as the killing of 35 Muslim worshipers and the wounding of 14 last week in the town of Dumba village in Borno State, Nigeria.

News of the tragedy was slow to emerge because area is remote and because internet and phone lines had been cut off by authorities in the attempt to disrupt the activities of the group Boko Haram, suspected of the perpetrating the massacre. It was the second such incident in this month.

This morning’s report now indicate that 44 victims had their throats slit, and the remaining victims had their eyes gouged out. The official of the National Emergency Management Agency (NEMA), speaking on the condition of anonymity explained that the group adopted this method of killing as a strategy to avoid sound from gunfire which attracts security forces.