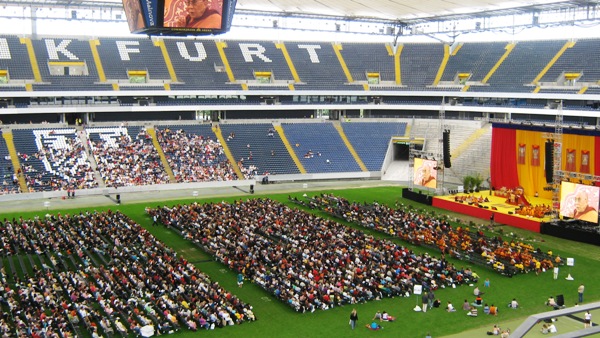 Frankfurt,
August 3: Over 50,000 people visited the Commerzbank Arena (Stadium) in
Frankfurt during the Dalai Lama’s four-day spiritual events that ended
on Sunday. Of them over 40,000 bought tickets to attend the Dalai
Lama’s teachings and series of lectures on topics such as peace, the
environment, the economy and ethics, according to German media reports.
On
Sunday alone, over 15,000 people from all walks of life reportedly
attended the last public talk of His Holiness the Dalai Lama on “The
Art of Living”. The talks were simultaneously translated into German,
Spanish, Italian and Vietnamese.
Earlier
on Saturday, the Dalai Lama took part in a conference on the economic
crisis organised by several groups including Germany’s Buddhist Union.
In his talks, he called for worldwide cooperation to fight the effects
of the economic crisis by taking effective and appropriate action.