The civil war in Central African Republic is especially brutal, creating a humanitarian crisis so severe that it has captured world attention.The conflict is driven by “complex economic, social, and political factors,” but much of it arises from tense religious differences. Thankfully, both Catholic and Muslim leaders are collaborating in the effort to heal their nation’s troubles.

We at the IRFWP applaud these leaders’ courageous work, setting aside fundamental differences in the effort to restore peace in their nation. We pray the civil war ends as soon as possible.

In light of the civil war currently taking place within the Central African Republic, the Archbishp of Canterbury, Justin Welby, welcomed a delegation comprised of high-level religious leaders from the afflicted state to Lambeth Palace in London. Among the leaders present were the Roman Catholic Archbishop of Bangui, Dieudonné Nzapalainga, and Imam Omar Kabine Layama. The two leaders have been working closely with the President of the Alliance of Evangelicals of Central African Republic (CAR), Reverend Nicolas Guérékoyamé Gbangou, touring their state in an attempt to defeat interfaith tension and “promote peace and tolerance.” 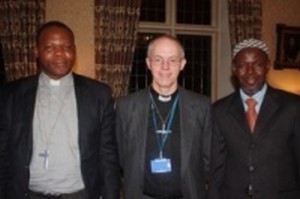 Following the meeting, Archbishop Justin Wellby appeared optimistic, affirming that “the very evident friendship and inter-religious co-operation between religious leaders offers both a notable example and an effective platform for joint advocacy on behalf of the people of the Central African Republic.” With approximately 95% of CAR’S population represented by the two congregations, this “major inter-religious initiative” represents the necessity of interfaith unity during times of strife. The three religious leaders are currently traveling throughout Europe to seek ways in which the international community can help mediate the conflict.