IRFWP Director, Dr. Frank Kaufmann has been invited as a “featured guest” to events surrounding the efforts of ISNA to highlight Muslim opposition to religious and violent extremism, and to present interfaith solidarity among leaders and believers of all faiths to stand shoulder to shoulder with friends and believers, brothers and sisters in the world’s great faith traditions.

Dr. Kaufmann is featured with ISNA this week representing Bridges to Common Ground, and its recent release of The Qur’an – with References to the Bible: A Contemporary Understanding

Read one such media report on this pressing initiative here 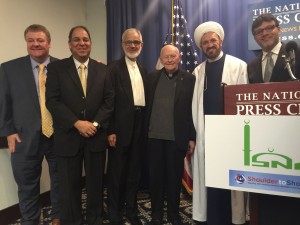