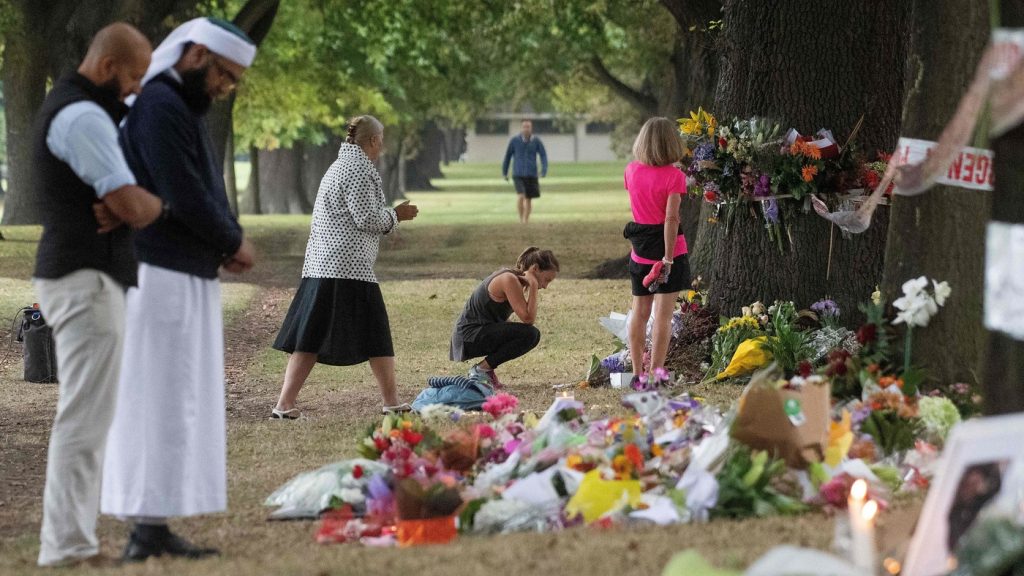 People on Tuesday stand next to floral tributes placed across the road from the Al Noor Mosque in Christchurch, New Zealand, where dozens of worshippers were gunned down last week.
Marty Melville/AFP/Getty Images

After the New Zealand attack, there is a surge of interfaith support for U.S. Muslims. Churches, synagogues and other houses of worship are trying to help mosque-goers feel less afraid.

Below are excerpts from the transcript from NPR radio station:

“We’ve all experienced the evil of hate. We pray that we be strong together and that all of us will work together to remove all of that hate…”

“Standing with each other in moments like this is vital, says Ginna Green of Bend the Arc, a progressive Jewish advocacy group.”

“The common thread that connects these tragedies, such as the Pittsburgh shooting on October 27, is a hateful, destructive, violent white nationalist ideology that targets all of us. In this moment, we are not safe unless we’re together.

And at a time when American Muslims say they feel vulnerable, Rami Nashashibi, a Muslim community organizer on the South Side of Chicago, says these alliances aren’t just comforting.

Our strength, our resilience and, in many ways, even our survival depends on those types of alliances in this country and beyond.

This was a tragedy, he says, but not a surprise. Hate crimes are on the rise. Other faith and community groups put out messages of support. The Evangelical Lutheran Church in America asked people to reach out to Muslim neighbors. The president of the American Atheists urged people to consider whether their own actions contributed to the climate that allowed the New Zealand attack. The Human Rights Campaign, an LGBTQ civil rights group, called on the president to stop fearmongering.

And at the University of Michigan in Ann Arbor, an interfaith vigil of more than 200 people gathered Saturday. Elected officials, rabbis, pastors and poets were among those who mourned the killings in New Zealand. But even that was interrupted by reports of an active shooter. People fled the vigil, leaving behind shoes and backpacks. It turned out it was apparently just balloons popping nearby on campus. But the fear was real.