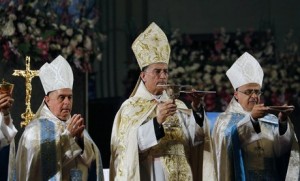 Churches in Lebanon held prayers on Saturday night for peace in Syria and against any armed intervention in the country, in a response to Pope Francis’ calls.Maronite Patriarch Beshara al-Rahi led prayers at Our Lady of Lebanon basilica in Harissa, the state-run National News Agency said.

“This is a day for prayers and we ask the Lord through Lady Mary for peace,” al-Rahi said at the prayer vigil.

The head of the  church tackled the political and security situation in Lebanon during the mass, warning of the spread of weapons and autonomous security.

“Because of the political fragmentation in Lebanon, the constitutional institutions are stumbling,” he expressed.

“This tiny country has received over one million and a half of Syrian refugees escaping the turmoil and the killings in their country, and Lebanon is bearing the cost on the security, social and economic levels.”

Al-Rahi also called for forming a capable cabinet, urging political factions to reach out to each others, and put the interests of the state’s institutions “above all considerations.”