Surely we cannot affirm the notion that a public official should be removed from office for “not believing in God,” but what do you think of his own defense?  Do you agree that the matter is not relevant to public office?

Asheville City Councilman Cecil Bothwell believes in ending the death
penalty, conserving water and reforming government — but he doesn’t
believe in God. His political opponents say that’s a sin that makes him
unworthy of serving in office, and they’ve got the North Carolina Constitution on their side. 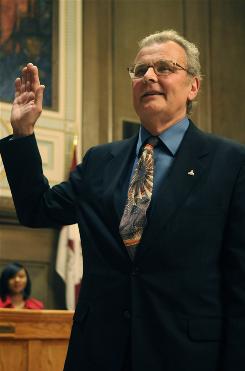 “The question of whether or not God exists is not particularly interesting to me and it’s certainly not relevant to public office,” the recently elected 59-year-old said.

The entire article is here