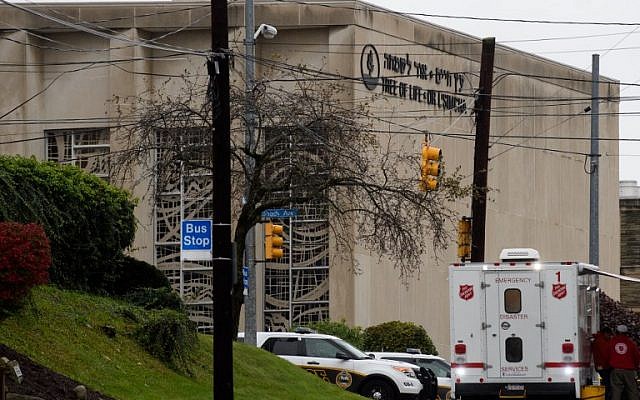 The scene of a mass hooting at the Tree of Life Synagogue in the Squirrel Hill neighborhood on October 27, 2018, in Pittsburgh, Pennsylvania. (Jeff Swensen/Getty Images/AFP)

We of the IRFWP are greatly encouraged by the condemnation, and the condolences issued by the Palestinian Authority, for our Jewish brothers and sisters, following the heinous, tragic, and deadly attack on the Tree of Life synagogue in Pittsburgh, October 27th, 2018.

We are proud of our brothers and sisters in Palestine, and use the occasion of printing this news to add our own voice to the 1000s of organizations and leaders to express our most profound sorrow in solidarity with Tree of Life families, with Jewish believers, and with all people of conscience in this time of shock and sadness.

We pray that all our oneness that arises in such times of unspeakable loss and crisis may persist to carry us toward enduring peace and mutual embrace across religions, cultures, and ethnic bonds. [editor, IRFWP]

The Palestinian Authority Foreign Ministry on Sunday condemned the deadly shooting attack at the Tree of Life synagogue in Pittsburgh, calling it “a terrorist act.”

A gunman, who entered the Jewish place of worship on Saturday, shot dead at least 11 people and injured six others.

The suspected gunman, identified as 46-year-old Pittsburgh resident Robert Bowers, reportedly yelled “All Jews must die” as he entered the synagogue and began firing during a circumcision ceremony, or brit. He engaged in a shootout with responding police officers and barricaded himself inside the building before surrendering. He is said to have been injured.

The PA Foreign Ministry said that it stood in solidarity with the American people and offered its condolences to the families of the victims.

“We have received the news with sorrow that many people were killed and injured in an armed attack targeting a synagogue today (27 October) in Pittsburgh, USA,” the Turkish Foreign Ministry said in a statement. “We strongly condemn this heinous attack and express our condolences to the grieving families, the American Jewish community and the people of the United States.”

On Sunday morning, the Saudi embassy in Washington, DC, also condemned the shooting.

“The Embassy expresses its sincere condolences to the American people and to families of victims of the violent incident at a synagogue in Pittsburgh today. Houses of worship are meant to provide safe and spiritual refuge. Those who desecrate their sanctity attack all humanity,” the Saudi embassy tweeted.