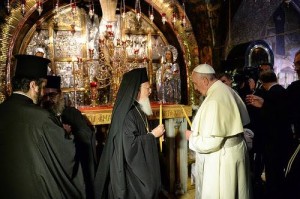 The Pope met with the spiritual leader of the world’s Orthodox Christians, the Ecumenical Patriarch of Constantinople Bartholomew I. Pope Francis arrived in Israel on Sunday afternoon and called for recognition of Palestinian rights to a sovereign homeland, as well as Israel’s right to exist in peace. He was greeted by numerous political and religious dignitaries including President Shimon Peres and Prime Minister Binyamin Netanyahu. In the Pope’s address, he pointed out that although Jerusalem was the city of peace, conflict continued to prevail and there remains the “urgency” of the need for peace in Israel and its surrounding region.

“In unity with all those of good will, I urge on everyone who bears the responsibility not to stop for a moment in the search for fair solutions to the complicated problems in order that Israelis and Palestinians can live in peace,” Pope Francis said. “We must always go out in courage and without tiredness to the path of dialogue peace and reconciliation. There is no other way,” he continued. “Therefore I renew the call of Benedict XVI in this place: the right of existence for the State of Israel to be recognized universally, the right to live in peace and security in recognized borders by the international community. At the same time, the rights of the Palestinians to a sovereign homeland, to life with dignity and freedom of movement should be recognized. We hope that the two state solutions will become reality and will not remain a dream.” 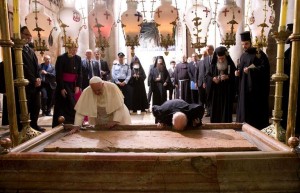 Continuing his address, the Pope condemned the Holocaust as a symbol of the “depths to which man’s evil can reach,” saying that it was brought about by “a false ideology which forgot the basic dignity of all men, who are entitled to complete respect, without connection to their national origins or religious faith.”

Prime Minister Netanyahu declared the pope’s visit an “important chapter in the history between Jews and Christians.” President Peres voiced Israel’s respect for freedom of religion, vowing not to “allow anyone to violate this commitment,” as well as praise for Pope Francis and the Church he heads.