Fifty years ago Edward Flannery published “The Anguish of the Jews: Twenty-Three Centuries of Anti-Semitism,” an outstanding book that permanently changed relations between Christians and Jews. His pioneering efforts exposed a pervasive animus towards Judaism within Christianity.

People hold Israeli flags as they listen to speakers during a demonstration against anti-Semitism at Berlin’s Brandenburg Gate on Sept. 14, 2014. Photo courtesy of REUTERS/Markus Schreiber/Pool *Editors: This photo may only be republished with RNS-RUDIN-OPED, originally transmitted on Aug. 22, 2016.

A gifted theologian and historian, Flannery was the first director of Catholic-Jewish relations for the U.S. Conference of Catholic Bishops. In that role, he challenged his fellow Christians to confront and root out the pernicious anti-Judaism embedded in their religious teaching and preaching…. 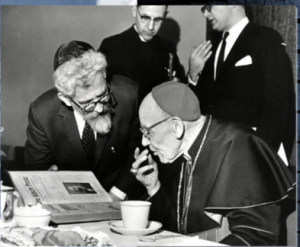 Jules Isaac, the inspector general of France’s public educational system in the 1930s, termed the church’s long record of anti-Judaism the “teaching of contempt,” a phrase that has entered into the permanent lexicon of interreligious relations. Unfortunately, Isaac’s meeting with Pius XII in 1949 yielded few positive results, but his conversation with John XXIII in 1960 motivated the pope to seek a fundamental transformation in the church’s teachings about the Jewish people and their religion, a reordering that began in 1965 with the Second Vatican Council’s “Nostra Aetate,” the declaration on the Catholic Church’s need to build a positive relationship with the Jewish people.