From March 2013 until January of this year, Muslim rebels of the Seleka alliance controlled the capital of Central African Republic, terrorizing and killing the country’s majority Christian population. This persisted until these Islamist rebels were forced from power. Since the rise of the mostly Christian anti-balaka militia, CAR has been immersed in sectarian violence, which a UN official described as “massive ethnic-religious cleansing.” Thousands of Muslims have been murdered and hundreds of thousands seek refuge in bordering countries. 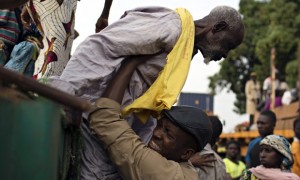 In the midst of this Father Bernard Kinvi from Bossemptele, west CAR was implored by an armed stranger (member of anti-balaka militia) to plead for a Muslim man’s life. The Catholic priest chose willingly to put his life in the hands of armed militiamen in order to try and save the Muslim man. Tragically, Kinvi and the stranger did not arrive in time to save the man’s life, but from that moment onward, Father Kinvi resolved to make efforts to shelter and protect Muslims.

“It wasn’t a decision; it was just something that happened,” 32-year-old Kinvi says. “As a priest, I cannot support the killing of a man. We’re all human: religion doesn’t come into it. If anti-balaka come in wounded, I treat them. I don’t care who you are or what you do with your life or what your religion is, you are a human being and I will treat you.”

Father Kinvi sheltered 1,500 Muslims at one point, risking his life to help them cross the border into Cameroon. He also treated wounded anti-balaka militiamen, and was surprised to find one night that many of them helped him in evacuating the refugees. Kinvi’s determination was contagious; he witnessed anti-balaka militiamen eventually coming to their senses and beginning to protect Muslims in their homes and guiding them to safety.

“When I became a priest, I undertook to serve the sick even if it meant putting my life in danger,” he says. “I said that but I didn’t really know what it meant. But when the war came, I understood what it means to risk your life. Being a priest is about more than giving blessings; it’s about standing with those who have lost everything.”