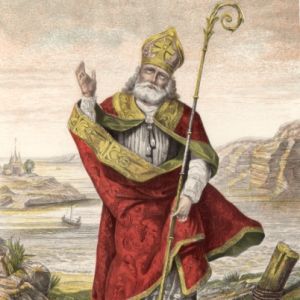 St. Patrick, (flourished 5th century, Britain and Ireland; feast day March 17), patron saint and national apostle of Ireland, credited with bringing Christianity to Ireland and probably responsible in part for the Christianization of the Picts and Anglo-Saxons. He is known only from two short works, the Confessio, a spiritual autobiography, and his Letter to Coroticus, a denunciation of British mistreatment of Irish Christians.

Article in AP VATICAN CITY (AP) — Bishops in Ireland have created detailed guidelines to address an issue the Roman Catholic Church has tried to keep under wraps for centuries: the plight of children born to Catholic priests and the … END_OF_DOCUMENT_TOKEN_TO_BE_REPLACED

From July 5 – 6, 2012 the Irish Business Executives Forum and the Saudi Arabia based International Islamic Forum for Dialogue will co-host the conference Islamic Economy and World Peace – Islamic Perspective in the Dublin Convention Center, Dublin Ireland.Some…

END_OF_DOCUMENT_TOKEN_TO_BE_REPLACED

Included in among the many responsibilities borne by Dublin-based Sheikh (Dr.) Shaheed Satardien, are his roles as Director of the Intercultural Peace Centre, and President of the Muslim Council of Ireland.  As such Dr. Satardein was invited to the Gospel…