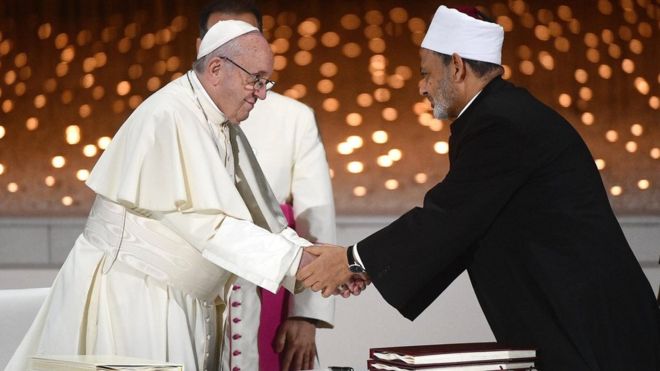 The head of Sunni Islam’s highest seat of learning has urged the Middle East’s Muslims to “embrace” local Christians.

Sheikh Ahmed al-Tayeb, the grand imam of al-Azhar in Egypt, told an interfaith meeting in Abu Dhabi attended by Pope Francis that Christians were “our companions”.

He also called on Muslims in the West to integrate into their communities while maintaining their identities.

In his speech, Pope Francis called for a halt to wars in the Middle East.

Sheikh Ahmed and Pope Francis addressed a gathering of religious representatives at the Abu Dhabi Founder’s Memorial on Monday night after signing a “Document on Human Fraternity for World Peace and Living Together”.

The document calls on leaders of the world to work together to “spread the culture of tolerance” and to “intervene at the earliest opportunity to stop the shedding of innocent blood and bring an end to wars, conflicts, environmental decay and the moral and cultural decline the world is presently experiencing”.

In his speech, Sheikh Ahmed first addressed his fellow Muslims in the region.

“My message to you is: ‘Embrace your Christian brothers and sisters. They are companions in the state. They are close to us. There are special bonds between us,'” he said.

He then turned to Middle Eastern Christians and said: “I’d rather you didn’t use the term ‘minority’.