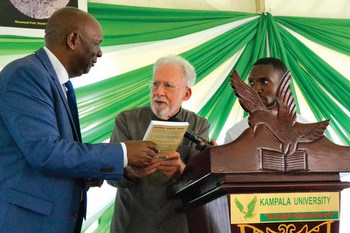 In front of an audience of about 1,000 at Kampala University in Uganda, Badru Kateregga and David Shenk speak about Christian-Muslim dialogue and the book they co-authored almost 40 years ago, A Muslim and a Christian in Dialogue. — Kampala University

For four days in April, Badru Kateregga asked audiences a question as he toured Uganda with David Shenk: “How many of you can say you have a friendship that has lasted 40 years?”

Kateregga and Shenk can. Their friendship has made an impact on countless people by demonstrating the transformative effects of respectful dialogue between faiths.

For many years, Kateregga and Shenk have lived out the message of the groundbreaking book they co-authored in 1980, A Muslim and a Christian in Dialogue.

Kateregga invited Shenk on an April 16-19 peacemaking tour of his home country, celebrating almost 40 years of the book — and an even longer friendship between a black African Sunni Muslim and a white North American Mennonite.

David Shenk felt that what people found most compelling was simply the enduring friendship between two people with such striking differences.

Kateregga is a prominent figure in the Muslim world. Besides founding Kampala University, he founded the East African Universities of Kenya and Rwanda and served as Uganda’s ambassador to Saudi Arabia, the Persian Gulf states, Iraq and Palestine.

Shenk has spent his life working to share a Christian witness. He has served with EMM virtually all his adult life, both as a missionary and on staff. He has authored or co-authored more than a dozen books.

Both men are dedicated peacemakers. Their belief in the power of dialogue and mutual respect drew them together when they first met in the 1970s as religion professors at Kenyatta University in Nairobi.