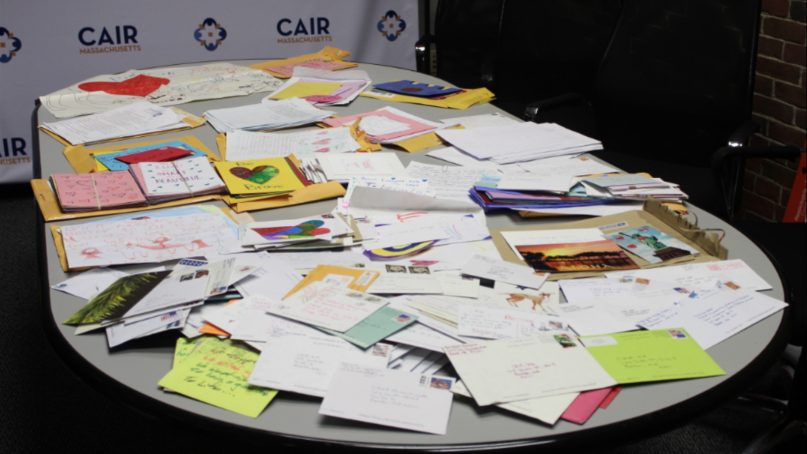 Letters received by CAIR-Massachusetts in support of a 10-year-old Muslim girl. Photo courtesy of CAIR

BOSTON (RNS) — When a 10-year-old Muslim girl looked in her classroom cubby one Friday morning last month, she found a note there with the words, “You’re a terrorist,” scribbled in childish, all-capital letters.

The next week, a message appeared, saying, “I will kill you.”

“She was visibly upset — she was crying,” her uncle Jamaal Siddiqui told CBS Boston. “Just the thought of that makes me feel sick to my stomach.”

Now, two weeks after receiving the threat, the fifth-grade student at Hemenway Elementary in Framingham, Mass., has stacks upon stacks of letters of support from all over the country, waiting to be read.

“Dear young sister, assalam ‘alaikum!” one letter with a colorful heart began. “May you have peace in your heart, a smile on your face, and every good thing in this life and the next.”

“Hi friend!” another read. “A Jewish family from Maryland is sending you love and support. You are wonderful.”

“People of all religions should be freinds [sic],” a 6-year-old child named Sophie wrote above a colorful illustration of a young girl in a red hijab holding hands with a blond-haired girl.

In all there are more than 500 letters from more than 20 states.

“No child deserves to feel afraid at school because of their faith,” said Sumaiya Zama, director of community advocacy and education for CAIR’s Massachusetts branch. “We’re incredibly heartened by the wider community’s support for this young Muslim student, particularly by the powerful messages from the interfaith community.”