The ancient Holy Sepulchre has long been a source of tension between the Christian churches sharing it. Now, preserving the building is forging new cooperation.

Ottoman Turkish sultan’s 1852 declaration about which Christian denominations control which parts of the sprawling church – originally made to calm tensions between the world’s powers in the Holy Land – is still essential today to preserve peace between the Greek Orthodox, Roman Catholic, Armenian, Coptic, Ethiopian and Syrian Orthodox churches, all which have convents and chapels and conduct myriad daily liturgies here. 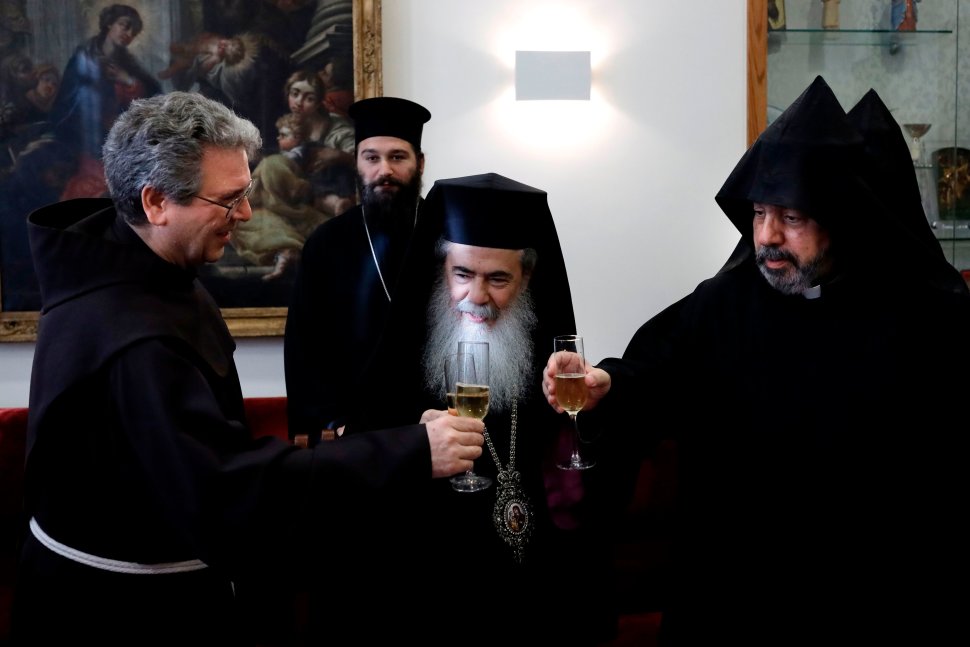 Francesco Patton (left) custos of Franciscan friars, Theophilos III (center) Greek Orthodox Patriarch of Jerusalem and Nourhan Manoughian (right) Armenian Patriarch of Jerusalem toast after signing an agreement to initiate a project for the restoration and rehabilitation of the Church of the Holy Sepulchre, in Jerusalem, on May 27, 2019.(THOMAS COEX/AFP/GETTY IMAGES)

This so-called status quo declaration essentially froze the church in time. The times and places of the dozens of daily religious services haven’t changed in more than a century, and seemingly mundane objects – such as that ladder – have also remained in place, especially in areas shared by denominations.

Perceived violations of the status quo over the years have resulted in verbal arguments, fistfights and strained relations between the churches. In fact, the fighting among the various churches has become part of the Holy Sepulchre’s story, along with the events of the crucifixion and burial and resurrection of Jesus that many Christians believe happened here. The delicate relations have also meant that much of the building has fallen into disrepair, as agreeing to fix or upgrade shared spaces has proven difficult.

But now this appears to be changing. In May, the local leaders of the Roman Catholic, Greek Orthodox and Armenian Orthodox churches – the denominations given primary control in the status-quo declaration – signed an agreement to renovate the floor, foundations and sewage system of the church. It is the latest sign of growing cooperation among the denominations in the face of the urgent need to preserve their ancient properties, a growing influx of pilgrims and tourists and an increased need for self-preservation as local communities shrink and there is no resolution in sight for the Israeli-Palestinian conflict.