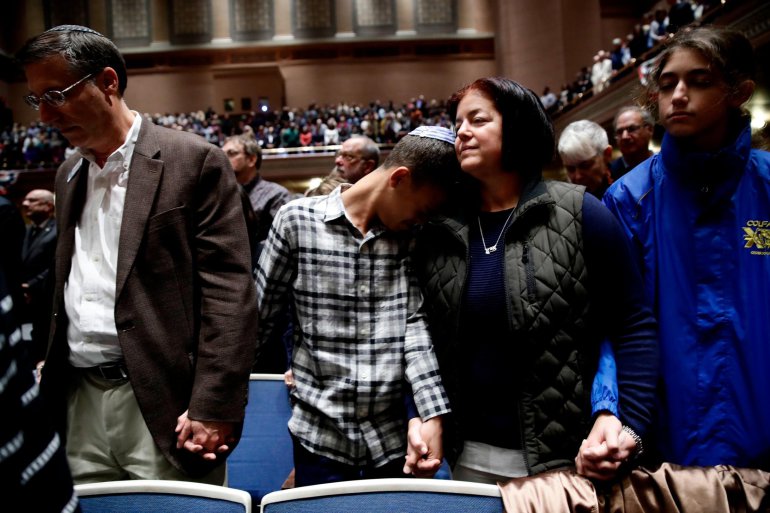 People mourn during a community gathering for the Tree of Life Synagogue in Pittsburgh on Sunday. (Credit: Matt Rourke/AP)

A new campaign is encouraging Americans of all faiths to visit synagogues for Shabbat services Friday and Saturday as a show of strength and love against hate.

Launched by the American Jewish Committee, a global Jewish advocacy organization, the #ShowUpForShabbat campaign is a reaction to last Saturday’s massacre, when 11 worshipers were gunned down at a synagogue in one of Pittsburgh’s most vibrant Jewish communities.

Shabbat, Judaism’s traditional day of rest, is observed from Friday evening to Saturday evening. Its rituals include prayer, family gatherings and festive meals.

The campaign is also asking elected officials, religious and civic leaders and other community allies to show up. It’s telling synagogues to expect an influx of attendees during their Shabbat services and asking them to provide explanatory programming for newcomers.

One religious group has already pledged to attend.

A leader of the Sikh community in the US, who experienced their own tragedy when a gunman killed six worshipers at a temple in Oak Creek, Wisconsin, in 2012, is encouraging Sikhs to go to Shabbat services this weekend.

“After Oak Creek, the Jewish community resoundingly stood by Sikh Americans, and this time we encourage our whole community to stand with our Jewish brothers and sisters,” said Rajwant Singh, co-founder of the National Sikh Campaign, in a statement.