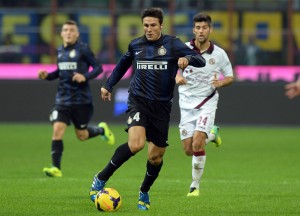 Javier Zanetti, organizer of the event

Pope Francis is bringing interreligious action to a new level. News broke yesterday that His Holiness asked former Argentinian captain Javier Zanetti, who is also vice-president of the Inter Milan football club, to organize an interreligious football game in Rome this September 1st.

The game will bring together former and current star players including such greats as Messi, Gianluigi Buffon, french legend Zinedine Zidane, and even Jose Mourinho will trade his uniform for a peace-colored football jersey. Players will represent a broad range of religious affiliations

Interreligious action and sport have been put together in the past, such as IRFWP’s Interreligious Peace Sports Festival, and the World Culture and Sports festival, a major international event convened annually in the 1990s, but this is the first ever event of this kind launched by a pope. With regard to football itself, similar efforts were made to harness the incredible reach and attraction of football for the sake of peace by Sun Myung Moon and soccer great Pele  who worked together to create soccer’s international Peace Cup.

It has not been confirmed yet whether Pope Francis will attend the game, but the prospects of such a high profile, interreligious event are very exciting, especially while the world’s biggest event, the World Cup is unfolding this week end in Brazil. Pope Francis is innovative and a true ground breaker in seeking greater interreligious understanding in this fine way.

In the meantime, Germany plays against Argentina this Sunday. The Vatican reported it was unlikely that Argentinian Pope Francis and German ex-pope Benedict would watch the game together.