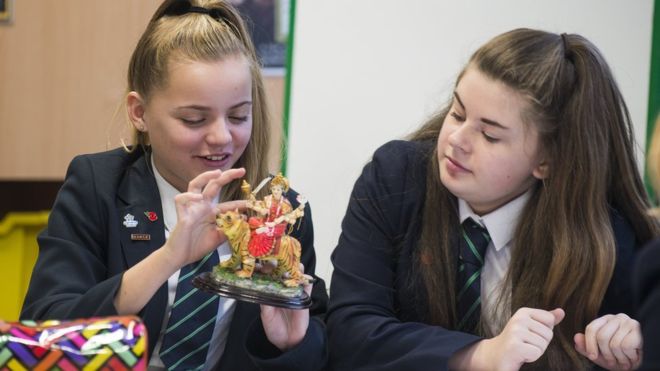 Schools should teach a wider range of religious and non-religious views, says the report.

Religious education in England’s schools should be renamed Religion and Worldviews to reflect the diversity of modern Britain, say experts.

The subject should include non-religious worldviews as well as major faiths, says the Commission on Religious Education final report.

It follows research suggesting at least a quarter of schools break the law on teaching RE.

The independent Commission was set up two years ago by the Religious Education Council of England and Wales, amid growing concerns about the quality of RE lessons.

The commission’s report confirms that the quality of RE in schools is “highly variable”.

There is some excellent practice in some schools. it says, but in others the amount of time allocated to the subject is being squeezed, and the subject is suffering from an across-the-board decline in specialist teachers.

The new subject would allow pupils to study the different traditions of major religions such as Christianity, Buddhism, Hinduism, Islam, Judaism and Sikhism but alongside these they would also look at non-religious worldviews like humanism, secularism, atheism and agnosticism.