This week, Pope Francis announced that his first European trip will be to Albania. The visit will take place in September.

Albania was once one of the world’s most isolated countries. Former Albanian dictator Enver Hoxha repressed religion through destroying religious buildings and arresting clergy. Francis explained that the purpose for this trip lies in supporting “a country that has long suffered from the consequences of the ideologies of the past.” 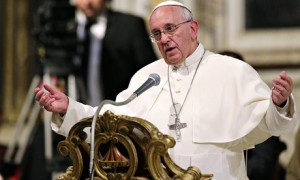 In light of the recent Vatican “prayer summit” the planned trip represents continued devotion to religious and ideological reconciliation for the positive welfare of world citizens. On June 8th, Pope Francis oversaw a meeting with both Israeli and Palestinian presidents where Jews, Muslims, and Christians alike all suggested “invocations for peace.” Though the Pope affirmed that the meeting would solely be about “prayer, not politics,” the two presidents and the Pope met privately following the ceremony, quietly causing speculation about reviving Israeli-Palestinian peace talks.

IRFWP supports efforts for peace involving religions and nations from the Holy Father. His efforts aid to rid the world from legacies of hate, while striving to promote a harmonious future for all religions.

Read more about the Pope’s trip to Albania here

Read more about the Israeli-Palestinian Presidents in the Vatican here